By Julia Kiersznowski and Megan Kelly 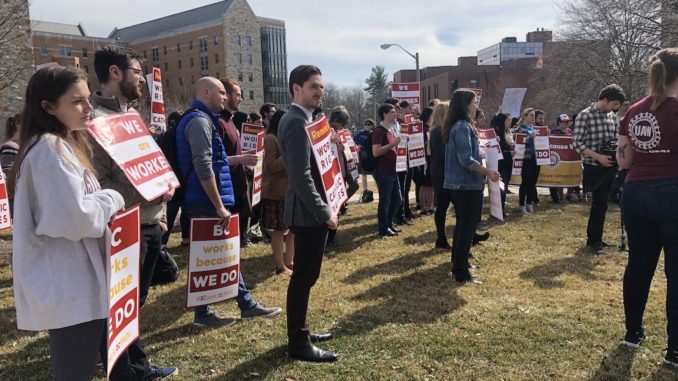 The Boston College Graduate Employees Union (BCGEU-UAW) picketed and held a rally on March 10 where dozens of people urged the BC administration to meet with members of their newly elected bargaining committee. The union called on the University to establish a contract that would address their concerns about harassment, pay, and health care.

“None of the things that we’re asking for in a contract are unreasonable,” Sam Levinson, a member of the bargaining team and a Ph.D. candidate in the chemistry department, said in an interview at the protest. “These are all things that graduate workers at other universities already have.”

Dave Cavell—a candidate running for the Mass. 4th Congressional District, which includes BC’s campus—spoke at the rally. At a congressional debate held on BC’s campus in February, Cavell expressed his support for graduate student unionization.

“My wife is a grad student here who is fighting alongside you,” Cavell said to the protesters. “I started out in the union myself. … Here is one thing that I learned: When we fight, we win. That’s what you’re doing today.”

Kyle McCaffrey, a graduate student at the School of Theology and Ministry and a member of the union’s elections committee, pointed to the Catholic church’s history of supporting unions.

“For 129 years, the popes have said that all people, not just Catholics, have a right to unionize,” McCaffrey said. “Catholicism grants no religious exemption to this administration. It impels them to respect our rights, to bargain with us as equals, and to make room for us to be better women and men—better people—for others.”

Associate Vice President of Communications Jack Dunn said in a statement to The Heights after the protest that there is no legal basis compelling BC to negotiate.

“Their action nullified the election of 2017, and ended any legal basis for the University to grant the students’ request to bargain,” the statement read. “It is important to note that there was never overwhelming support for this unionization effort among graduate students. The now moot election resulted in approximately 1/3 of the eligible graduate students voting in favor of the union, 1/3 (although 46 fewer than the votes in favor) voting against the union, and 1/3 of graduate students not voting at all.”

“Boston College has a long history of supporting unions on campus, as evidenced by the strong relationships we have had with our Facilities and Police unions,” the statement says. “The University, however, believes that graduate student unionization in any form undermines the longstanding collegial mentoring relationship experience between students and faculty that is a cornerstone of the BC academic community.”

BCGEU-UAW first filed a petition with the National Labor Relations Board (NLRB) in March 2017, seeking to hold an election to become a fully unionized group. The NLRB ruled in favor of the election in May 2017, and graduate students formally voted to organize the following September. BC appealed the NLRB decision prior to the vote, and BCGEU-UAW subsequently withdrew its petition, citing that the NLRB was appointed by President Donald Trump and they had seen it “undo rights and protections of workers”—if the board had ruled for the University, the union would have lost its legal right to bargain.

Graduate student workers have continued to rally for the University to voluntarily bargain with the BCGEU-UAW, seeking a contract that, among other things, guarantees health care coverage and protection from discrimination and harassment in the workplace. The bargaining committee is a five-member group that is “expected to bargain for the good of the unit as a whole according to the bargaining goals ratified by the entire unit membership,” according to the BCGEU-UAW website.

“None of these asks are outrageous, and indeed, other contracts for graduate workers at other universities, public and private, address issues such as these,” Levinson said in an email to The Heights after the protest.

In a letter released shortly after the withdrawal of the petition, Vice President for Human Resources David Trainor said that without a legally recognized bargaining agent, there was no legal challenge to the University’s position. Since then, the University has refused to voluntarily bargain with the group.

“[Administrators] are going to tell everyone that we are only concerned about money, as if they are not,” said Josh Lown, a Ph.D. student in the BC School of Social Work and a member of the newly elected bargaining committee, to the group of protestors.

“As if there’s not a direct line between how much wealth they accumulate and how little they offer us. … The powerful classes of bureaucrats and managers from the factory line to the ivory tower have always been getting fat out of our labor, scolding us for not pinching pennies while they comfortably own homes in the most expensive towns and neighborhoods in the region.”

Bryn Spielvogel, a graduate student at the Lynch School of Education and member of BCGEU-UAW, served as the rally’s primary host. She emphasized the University’s poor treatment of its graduate workers and their need to quickly negotiate a contract.

“So this is really not a question about whether or not we’re workers, but rather a question of how the University is going to treat us,” Spielvogel said to the crowd. “Thus far it has not been so good. We’re hoping to turn that around and start working with the University to negotiate a fair contract—make sure that everyone has a living wage, make sure that everyone has comprehensive health care coverage and protections from discrimination and harassment in the workplace.”

“It’s not only our legal rights that Boston College is ignoring,” Spielvogel said. “BC’s refusal to recognize the union and negotiate a contract directly contradicts the Catholic social teachings that honor the dignity of work and the rights of workers to form and join the union.”