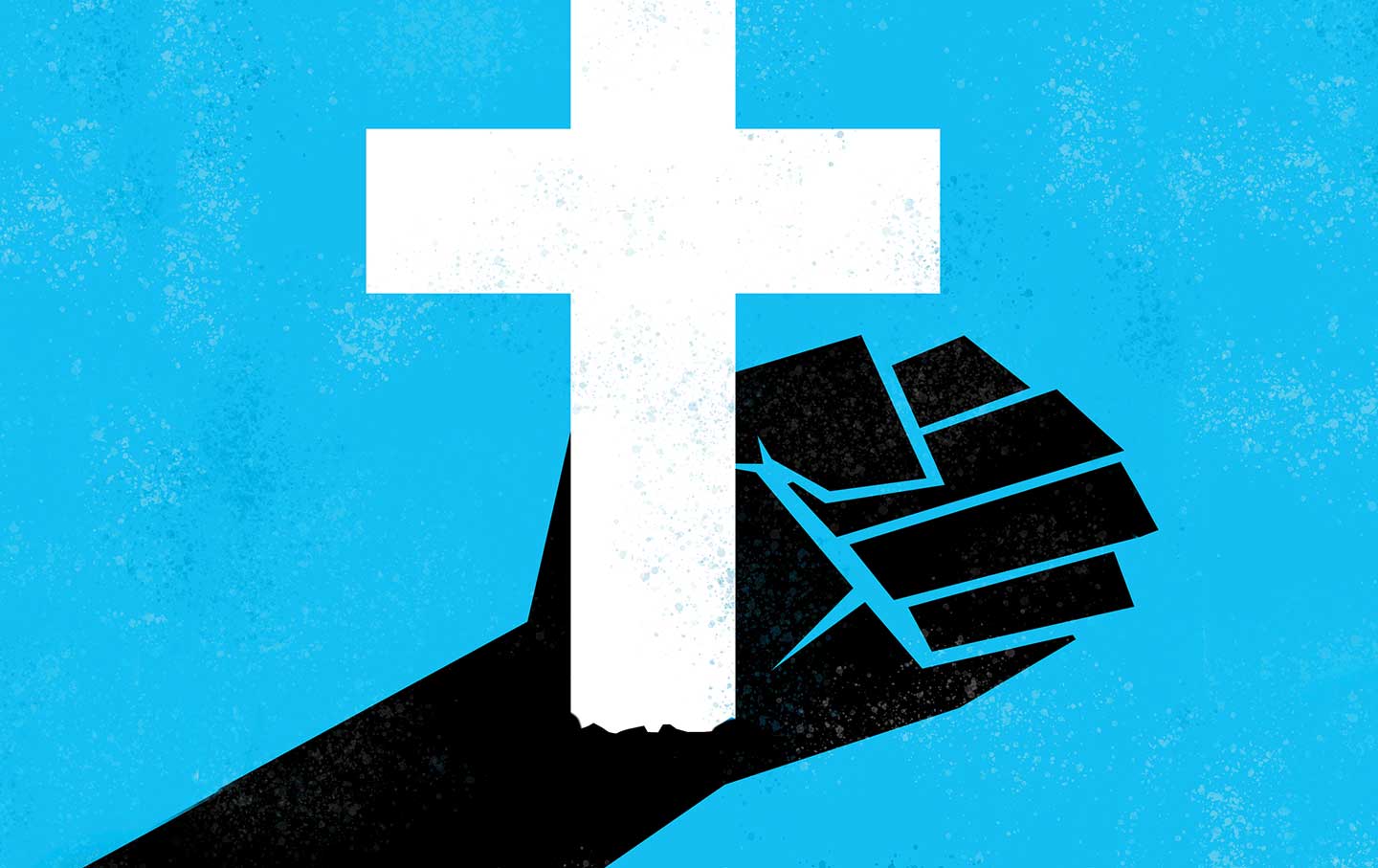 Betsy Pingree has been living with friends for free because she can’t afford an apartment while finishing her dissertation on the precarious conditions of migrant laborers in the 20th century. Standing with fellow graduate-student workers at Boston College who are demanding recognition of their union, she acknowledged the irony. Like many in her cohort on this leafy Catholic campus in the Boston area, she works as many as 60 hours a week on her research and teaching. She earns a stipend of $22,600 a year; the average one-bedroom apartment in Boston costs $11,000 more than that. She used to live with her husband, a disabled veteran, who helped support her with his government payments. Now that he works out of state, she can’t pay her own rent.

On March 10, Pingree stood outside a Gothic-style Jesuit church at the entrance to the school with other graduate teaching and research assistants, holding placards that read, “Worker rights are Catholic values.” The rally came one day before Boston College announced it would cancel on-campus classes and shift to online instruction because of the coronavirus threat. BC declared that while fully funded graduate students would keep their stipends and benefits, hourly paid graduate students would get a check only “if they are fulfilling their regular responsibilities—and work on campus.” Meanwhile, Sam Levinson, a chemistry PhD candidate, said research assistants like her who work in labs were feeling pressured by their supervisors to continue showing up for work until the university announced it would “ramp down” research by the end of the day on March 20. The crisis only underscored the lack of protection faced by these workers, who accuse Boston College of betraying the Jesuit tradition of reverence for unions by refusing to bargain with them after they won a union election in 2017. “Without a contract, we have no access to any kind of guarantee that our bosses will protect us from harm in this situation,” Levinson said. At the rally, the organizers hoped to grab the attention of a delegation from the Association of Jesuit Colleges and Universities that was visiting the campus as part of a review process through which schools like BC are supposed to demonstrate their commitment to Jesuit values, including on issues like payment for employees. While the university has negotiated with unions representing police and facilities workers, administrators insist that Pingree and her colleagues are students, not workers. And in opposing their right to form a union, the school has invoked a legal argument that has found increasing favor with federal agencies and courts: that BC’s Catholic mission puts the workers outside the protection of the law—in this case, outside the jurisdiction of the National Labor Relations Board (NLRB), which enforces the right of private-sector workers to unionize.

Religiously affiliated institutions, from Catholic universities like Boston College to for-profit corporations with Christian owners like Hobby Lobby, have used arguments about religious freedom to win exemptions from an array of laws intended to protect workers over the past decade. Many of these cases concerned the Affordable Care Act’s requirement that employer health plans cover birth control. But religious corporations have expanded such requests to seek ever-broader power over their workers, including the right to underfund employee pension plans and bust unions in the name of God. Some of these cases have been driven by groups like the Becket Fund for Religious Liberty, which wants to limit government regulation of religious entities and represented Hobby Lobby in its suit over the ACA’s birth control requirement, enabling foster care and adoption agencies to discriminate against LGBTQ parents and religious schools to fire employees with disabilities. Other cases have been brought by universities like Boston College that may have a financial rather than a religious motive for fighting unions on their campuses. “Employers have an incentive to refuse to bargain and just kind of rest on their religious character,” said Charlotte Garden, an associate professor at Seattle University School of Law. Her university, a Jesuit school, invoked a similar religious argument to defeat a union campaign by its adjunct professors.

The rise in corporate religious rights has coincided with an erosion in legal protections for workers overall. Forced to turn to a higher power than the law, workers at Catholic institutions have invoked the long history of support for unions in Catholic teaching. These workers have mounted campaigns accusing their institutions of taking advantage of the Trump administration’s evisceration of union rights while abandoning their Catholic values. “The efforts by these universities come at a time when a conservative judicial majority right now in the Supreme Court—and a growing sentiment on the federal court benches in general—favors using constitutional principles like the First Amendment as a battering ram against workers’ ability to bargain collectively,” said Joseph McCartin, a professor of history at Georgetown University. “What you’re seeing is institutions that are hiding behind the law but ignoring their own social teaching.”

The NLRB is composed of Donald Trump appointees who have made clear their intention to roll back union rights, including those of graduate students at private universities like BC. In September the board issued a draft rule—which is under review after a flood of public comments—to revoke the right of these students to unionize under its jurisdiction, reversing a ruling from 2016 that spurred a wave of graduate student unionization nationwide. In a second blow to workers at religious universities, a federal appeals court in January ruled that Duquesne University did not have to recognize its adjunct faculty union because of its Catholic mission. “The workers at these institutions find themselves doubly betrayed, because on the one hand, like workers everywhere, they’re finding that the law provides less and less protection for them in the 21st-century economy,” McCartin said. “At the same time, they are working in institutions whose principles and teachings would seem to uphold their right to come together, and yet those institutions are now telling them that no, they don’t have those rights.”

Since the 2016 election, labor organizers have anticipated that a Trump-appointed NLRB might issue a sweeping exemption to religious universities. The fear of such a ruling prompted the Boston College graduate union to withdraw its petition to enforce its election in 2018. In a statement to The Nation, BC said this withdrawal “ended any legal basis for the University to grant the students’ request to bargain.” (The statement added that teaching and research assistants receive “generous annual stipends.”) But Bryn Spielvogel, an education PhD candidate who makes $21,000 during the academic year, said the university shouldn’t rely on the Trump administration’s anti-union position. “They no longer have a legal obligation to recognize and bargain with our union, but we believe that they still have a moral obligation to do so, particularly as a Jesuit university that holds up social justice as a core value and mission of the university,” Spielvogel said. 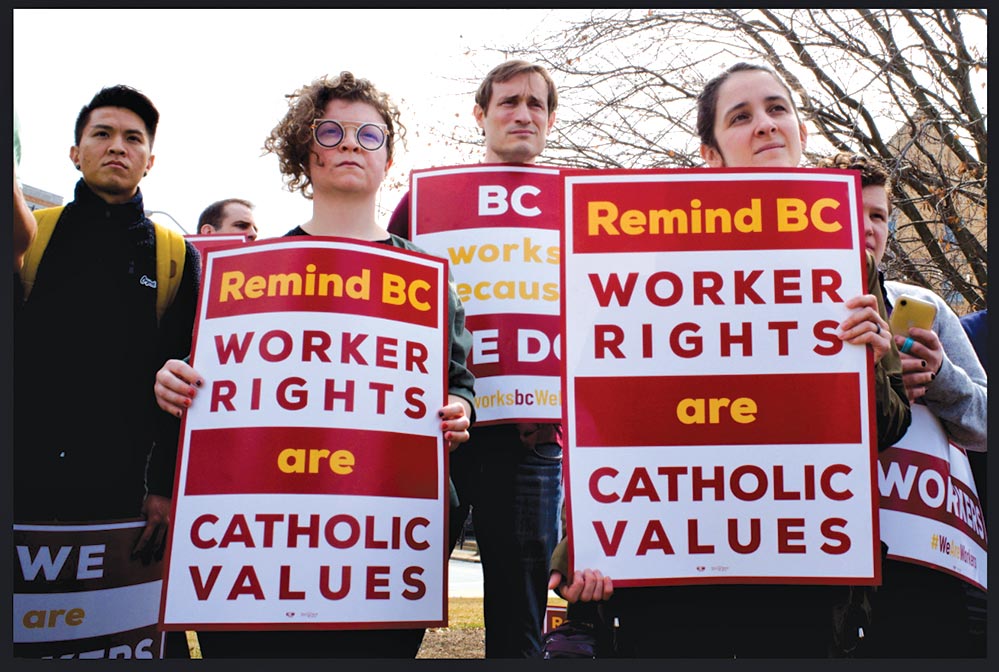 A higher law: Graduate student workers at Boston College argue that the university is betraying its Jesuit values in refusing to recognize their union. (Daniel Patterson)

In August 2013, Margaret Mary Vojtko was found unconscious from a heart attack on the front lawn of her derelict home after being let go from her job as an adjunct professor at Duquesne University. Vojtko, who at age 83 was being treated for ovarian cancer, had been earning less than $10,000 a year with no health benefits and was laid off without severance or retirement benefits from an institution where she had taught for a quarter of a century. She never regained consciousness, and her death two weeks later became a rallying cry for the plight of adjuncts, who work on fixed-term contracts; such non-tenure-track positions make up more than 70 percent of teaching positions in higher education. The year before her death, adjunct professors at Duquesne voted to form a union, but the university refused to recognize them, claiming it didn’t have to because of its Catholic mission.

While the NLRB generally protects workers at religious hospitals and workers like custodians who are clearly uninvolved in the religious missions of their employers, teachers at religious universities have proved to be more of a sticking point. In 2014, in a case concerning Pacific Lutheran University, the NLRB said, over the objections of the Becket Fund, that it could protect adjunct faculty at religiously affiliated universities unless the school claimed the teachers performed a religious function. The board therefore ordered Duquesne to negotiate with the adjuncts, ruling that only faculty in the theology department were exempt. But this January the DC Circuit Court of Appeals said any attempt by the NLRB to parse the role of faculty “impermissibly intrudes into religious matters.” (The union has petitioned for a rehearing in the case.)

The adjunct professors at Duquesne point out that the university’s Catholic mission has not prevented it from recognizing the rights of police, public safety dispatchers, and other workers who are unionized at its Pittsburgh campus. But according to the school, the adjuncts are different because “the academic work of the University across all disciplines is the work of the Church and contributes to the Church’s mission of evangelization.” Clint Benjamin, an adjunct professor of English at Duquesne, rejected that idea. “I would say that there is zero religious content in my curriculum,” he said. “I guess by showing up, in their eyes, I work for the mission, but you don’t have to be religious to go there. I didn’t have to take a fealty oath or anything.”

He called Duquesne’s decision to evoke its Catholic mission against the adjuncts “willfully hypocritical.” Duquesne, in response, pointed to a statement from the Rev. Dennis Holtschneider, the president of the Association of Catholic Colleges and Universities. “Duquesne voluntarily recognizes four unions on campus and is not so easily dismissed as anti-union, or anti-church-teaching on unions,” he wrote. “The question at some Catholic universities is less about unions as a larger reality, and more about particular unions in particular situations, especially when the Catholic identity of an institution could be impacted.”

But Benjamin noted the school’s Catholic mission should make it even more inclined to protect adjuncts, who work in precarious conditions. He has not been assigned any classes at Duquesne this semester because of low enrollment. When they have work, adjuncts there make only $4,000 a course. 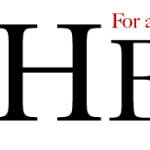