Archbishop Blaise Cupich Address to the Chicago Federation of Labor

"Work and unions are important not simply for what a worker ‘gets,’ but how they enable a worker to provide for a family and participate in the workplace and society. Unions are important not simply for helping workers get more, but helping workers be more, to have a voice, a place to make a contribution to the good of the whole enterprise, to fellow workers and the whole of society.” 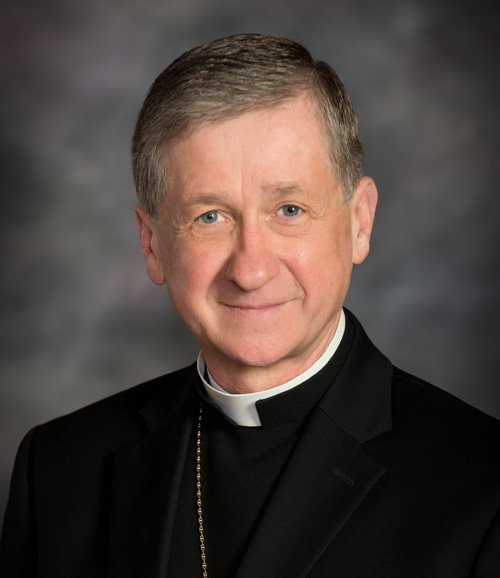 In a marketplace where too often the quarterly bottom line takes precedence over the rights of workers, we believe that the economy must serve people, not the other way around. Work is more than a way to make a living; it is a form of continuing participation in God’s creation. If the dignity of work is to be protected, then the basic rights of workers must be respected, the right to productive work, to decent and fair wages, to organize and join unions, to private property, and to economic initiative. Respecting these rights promotes an economy that protects human life, defends human rights, and advances the well-being of all.

In a marketplace where too often the quarterly bottom line takes precedence over the rights of workers, we believe that the economy must serve people, not the other way around. Work is more than a way to make a living; it is a form of continuing participation in God’s creation. If the dignity of work is to be protected, then the basic rights of workers must be respected, the right to productive work, to decent and fair wages, to organize and join unions, to private property, and to economic initiative. Respecting these rights promotes an economy that protects human life, defends human rights, and advances the well-being of all.

A union for BC graduate workers means a stronger voice, both at BC and in science policy nationally. Here’s how grad unions win when we take action on science funding.

Non-defense STEM (Science, Technology, Engineering, and Mathematics) research funding has now been stagnant for a decade, after decades of growth under administrations of both parties (see this overview by the American Association for the Advancement of Science, especially Figure 1). 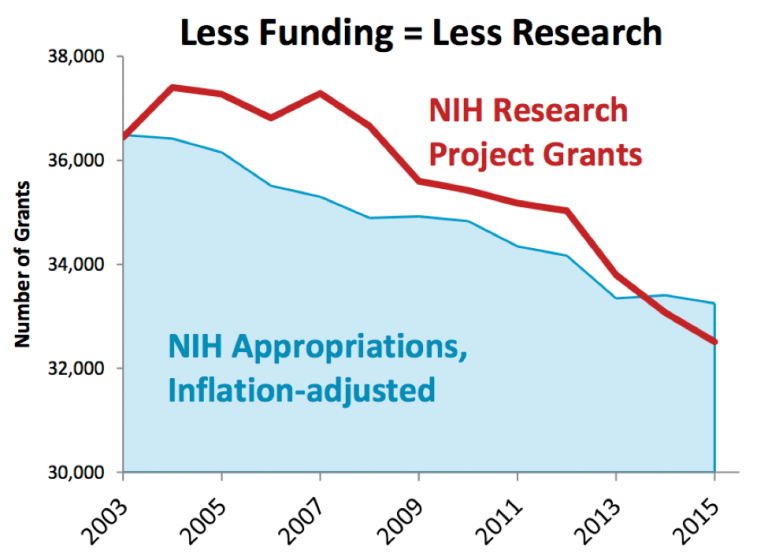 And it’s on the decline

Funding is declining in many research fields—and only a few years ago, federally funded research was threatened with deep sequester cuts. Early-career scientists face increasingly impossible academic job markets and heavily over-subscribed research facilities as they look to their future careers, even at this critical juncture in history when society faces so many scientific and technological challenges.

A recent white-paper draft revealed a steady decline in funding proposal success rates in astrophysics, with vast stretches of astronomers’ paid time spent on top-quality but unsuccessful grant proposals. The authors state that they “are concerned that we have reached a tipping point where the health and vitality of the community cannot be sustained.”

This pattern is mirrored in biomedical research, as described here by the Federation of American Societies for Experimental Biology (FASEB).

Taking on the big issues

Federally-supported research is one of the foundations of our economy.  At this point in history, with existential scientific and technological problems like climate change and energy independence, and so much potential to expand human knowledge, from new cures for diseases to telescopes looking for the origins of our world and universe, declines in funding and a horrible job market for the next generation of researchers are avoidable mistakes.

While our main goal as a union is to improve our working conditions, being organized also allows us to take on the big issues that matter to us, so that academics have a strong political voice.

The UAW and the March for Science

The UAW was proud to be a national sponsor of the March for Science to support members across the country as we advocate for our livelihood. Our union represents tens of thousands of scientists who work as postdoctoral researchers, graduate research assistants, and adjunct faculty at Columbia as well as from the University of Washington, University of California, New York University, University of Connecticut, Barnard College, The New School and the University of Massachusetts. Most of our work relies on federal funding.

Our union has a long history of being a vehicle to amplify the political voice of our members. In January we coordinated hundreds of people to attend the Women’s March and were excited to continue that legacy with the March for Science.  On April 22, 2017 UAW members joined tens of thousands of scientists and science supporters in more than 600 cities around the world to advocate for the protection of science and science funding. We marched because science is critical to our health, economies, food security, and safety. We marched to defend the role of science in policy and society. BUGWU-UAW is committed to continue the fight to protect science and science funding in the years ahead.

The UAW And International Academic Workers

Through union representation with the UAW, international graduate and postgraduate academic workers have made significant gains in pay, benefits, rights, and protections. The UAW supports several comprehensive immigration reform measures, including reforms of temporary worker visa programs, no limits on employment-based green cards for foreign students who graduate from American universities, and changes to the family based immigration system.

Universities across the country charge international students extra fees simply because they are not U.S. citizens. Based on fee waiver language won in their union contract through UAW Local 4121, international graduate workers at the University of Washington prevented the imposition of such fees on those who work as graduate assistants and have mobilized the union’s broader membership to fight to eliminate such fees for ALL international students on campus. GEO-UAW graduate assistants at the University of Massachusetts Amherst also successfully used their union grievance procedure to stop international student fees, arguing that they violated their contract’s non-discrimination clause. An arbitrator ruled that the fee was discriminatory and ordered the university to refund all students who had paid the fee.

Post-doctoral researchers at UMass Amherst in UAW-Local 2322 negotiated an expedited arbitration process so that international postdoctoral scholars who believed they were terminated unjustly could have due process without the threat of deportation. Through GEU-UAW Local 6950, graduate assistants at the University of Connecticut negotiated similar language as well.

Graduate workers at the University of California, UAW-Local 2865, made historic gains when they negotiated equal opportunity rights for undocumented graduate workers into their latest contract. As a result, the union and university are developing a system where DACA students can have equal opportunities for academic and professional development, including roles such as teaching assistant or graduate student instructor. Graduate worker activists in UAW Local 4121 at the University of Washington and in UAW Local 2865 at UC have also used the power of the union and played key roles in the passage of state-level DREAM Acts.

At Columbia University, international graduate workers from GWC-UAW, the graduate union for teaching and research assistants on campus, launched a petition to address the lack of summer research funding opportunities available to non-U.S. citizens. As a result of the petition, the Graduate School of Arts and Sciences (GSAS) endowed 15 fellowships of $3,000.

Recognizing the lack of resources for international students at Columbia University, the Graduate Workers of Columbia have held a series of workshops and forums: events were held with an immigration lawyer on visa and immigration issues and with certified public accountants for a taxes Q&A. Held on both the Morningside and medical campuses, the events were endorsed by the CUMC Chinese Students and Scholars Association (CSSA),Graduate Association of Latin American and Iberian Cultures (GALAIC), International Students Organization (ISO – medical campus), Latin American History Student Association, Mexican Society of Columbia University (MEXCU), and Taiwanese Americans Students Association.

Advocating for continued access to the OPT STEM extension

The United States Citizenship and Immigration Services (USCIS) received a court order to stop post-completion 17-month Science, Technology, Engineering, and Mathematics (STEM) OPT extensions by February 2016, because the agency had not followed the proper procedures when they began the extension.The Graduate Workers of Columbia hosted an informational session, which was co-sponsored by the Taiwanese Graduate Student Association and Indian Graduate Student Association, to immediately address the concerns of international students.

USCIS has introduced new rules to the OPT STEM extension program, and the UAW worked with international student workers to publicly comment on the changes.

When we act collectively, we have power, not only in our workplaces, but also in the national debates and federal actions that affect us.

Previous | Back to top